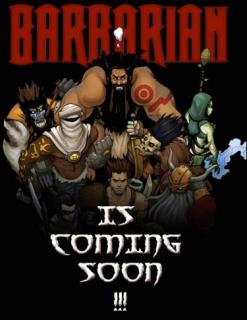 Can there be a feeling known to man that is more pleasurable than beheading your opponent while playing Barbarian, the seminal 2D one-on-one fighter? Actually there is: It?s when that little green goblin scurries across the screen and boots said head off the side.

It?s likely that these wonderful memories were the driving force behind Titus? decision to reincarnate the series for the PlayStation 2.

The game, which was originally planned for the Dreamcast, will be a 3D version of Barbarian2, in as much as you will be marching about and hacking stuff to pieces, as oppose to just doing it in one place. This is just the main game though. Titus has included a substantial multiplayer aspect that will include two-player one-on-one mode and a free-for all that can accommodate up to four players simultaneously.

The game has been likened to Powerstone by most who have played the initial builds, not bad thing we are sure you?ll agree. Our only concern is that at this point in time, beheading or dismemberment renders games ineligible for a ESRB Teen rating in the US so arguably the finest point of the game has been left out, which is a little dishonourable.

We?re also guessing that Maria Whitaker will not be asked to grace the cover of the PlayStation 2 remake.
Companies: Titus
Games: Barbarian 3