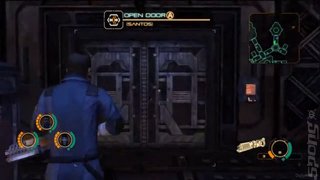 A 13 minute video purporting to be gameplay footage of the canned Obsidian Aliens RPG has appeared online.

The game is presented as a third-person squad-based action title, with options to heal characters, cut open doors and hacking terminals among the context-sensitive abilities on offer. Graphically, it doesn't look that stunning, with a visual style that seems closer to previous SEGA-published title Alpha Protocol.

But, at the very least, the game looks to be quite some way in development. There are clear bugs in the video, such as Aliens screaming with female voices, and enemies stuck in mid-air... but perhaps if it was completed it would have been a better proposition for gamers than Aliens: Colonial Marines (which we reviewed here).

SEGA cancelled both this RPG and Gearbox's Aliens: Colonial Marines a couple of years in development, but the latter was resurrected a few months later. Gearbox used a rather flashy demo at E3 2011 to illustrate the advanced lighting effects and atmosphere of its game - perhaps it was this promise that allowed the project to continue in favour of Obsidian's effort.