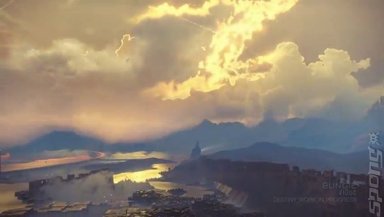 Work in Progress
All Images (12) »
Bungie has officially lifted the lid on its ambitious new space epic, Destiny. Classified as a 'Shared World Shooter', the game will feature FPS and vehicle elements as well as customisable avatars and character classes in a totally persistent universe.

Players assume the role of a Guardian, protecting the last safe city on Earth. The planet is under attack from strange alien creatures, with the aim not only to survive but to reclaim the territory lost to these mysterious foes. Combat, it seems, will be both FPS and vehicle based. Players will be able to customize their avatar's and vehicle's appearances.

The game, published by Activision, will be an online-only experience - and thus a permanent network connection will be required - with no subscription. Matchmaking and game match-ups are done on the fly, in a drop-in drop-out system that reports are likening to that in PS3 adventure game Journey.

"Bungie defined first-person action games over a decade ago with Halo, and with Destiny they will evolve the genre once again," said Eric Hirshberg, CEO of Activision Publishing. "Destiny is a world that evolves. It is a world with wide boundaries that allows you to roam and explore. It is a world where, even in story mode, you could encounter other players on their own adventures."

Bungie president Harold Ryan added that "Destiny will draw players into a world filled with mystery, action, and adventure, but most importantly, Destiny is more than a disc in a drive, it is a living social universe filled with other players."

Both Ryan and Hirshberg say a lot more stuff here. There's a tonne of extra details on the game on Bungie's official forums. See a bunch of screenshots in this very story by clicking the gallery link.