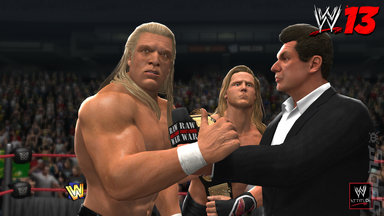 Take 2 has taken on the development rights for the WWE range of video games titles, apparently saving the administrators of THQ some $30 million in legal problems.

THQ has been gutted of games IPs over the last month since it filed for bankruptcy, and the WWE licence was seen as one of the jewels (money making gems in fact) in its broken crown.

By gaining the license, however, T2 will extend its 2K Games properties and also help out THQ creditors if a statement in court documents is to be believed:

"By working together to transition development of WWE games going forward the parties have minimized the harm to WWE and Yuke?s, which have, in turn, agreed to substantial reductions of their claims? against THQ, lawyers for the company said in court papers. The lawyers said without the agreement, WWE and Yuke?s claims ?would certainly exceed $30 million and might exceed $60 million.?

Bloomberg published the statement and states that:

"Under the accord, the WWE and Yuke?s contracts will be terminated and the companies will be allowed to enter into new agreements with Take-Two, which will hire THQ?s employees that work on the wrestling games, according to court documents.
The deal will also ?eliminate very large damage claims? that would have otherwise materialized from terminating the contracts, according to the court filing.

"WWE agreed to waive its pre-bankruptcy claims of about $45 million and any claims for annual royalty advances of about $7.5 million for the licensing contract that would have run through 2017. THQ will pay WWE $650,000 in royalty payments for the WWE games sold while under bankruptcy protection."