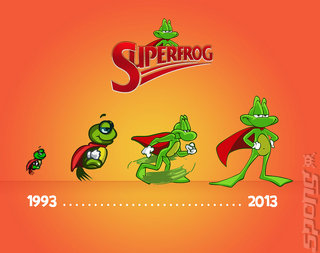 Team17 might be best remembered for Worms, but it had a number of other classic titles under its belt. One of which was the incredibly popular 1990s Amiga platformer, Superfrog. And, just one day before Valentine's Day, the studio has given us a love letter in the form of an HD update.

Superfrog HD will be arriving on PlayStation 3 and PS Vita later this year, to coincide with the game's 20th Anniversary. Besides "all-new graphics", nothing was revealed about the game's features. Team17 did, however, present us with some updated artwork of the green hero.

Team17′s Managing Director Debbie Bestwick said, ?We?re extremely excited about bringing Superfrog HD to PS3 and PS Vita; it?s the most requested game that our fans are always asking to see make a return. Now, with the 20th anniversary of the original Superfrog and the recent re-release of our classic survival-horror Alien Breed, we feel the timing has never been better."