Will now square up against GTA V. 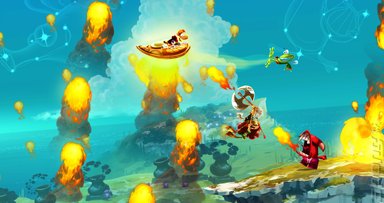 Rayman Legends will now be seeing a release in September, which pits the limbless hero in direct competition with the latest in Rockstar's colossal Grand Theft Auto franchise. It's not a fight in which Rayman will come out looking pretty, to be quite honest.

"We heard from many Xbox & Playstation owners and Rayman fans who told us they really wanted to play Rayman Legends," read a press release yesterday. "We decided to give the fans what they wanted while at the same time broadening the audience exposed to this innovative and memorable game."

Following this statement, the publisher spoke to Digital Spy and revealed, "There are no issues with the game development. All of the information was in the press release, the only reason for the delay is to release on multiple platforms.

"We usually release all of our platforms simultaneously (aside from PC). We’ve made special exception sometimes in the past but it’s definitely just on a case by case basis and not our standard practice. In this case, Ubisoft recently decided they wanted to release the game on multiple platforms so the decision was made to launch them all at the same time rather than separately."

Of course, one could see the move as a sign that Ubisoft's faith in Nintendo's new console may be waning. A platform exclusive is only considered if doing so makes good commercial sense - now it seems that Ubisoft might well be willing to suffer at the hands of GTA V, if it means guaranteeing greater sales from multiple platforms.

Wii U owners have not taken kindly to the announcement - Destructoid has a collection of angry comments that have been fired at the publisher on its official Facebook page.

As for Nintendo, it has not made any kind of comment as of yet - but no doubt it will be having trouble swallowing its collective cornflakes this morning after promoting the title so keenly on its prominent Nintendo Direct broadcasts.
Companies: Ubisoft
Games: Rayman Legends

realvictory 8 Feb 2013 13:06
1/1
I don't see why releasing on other platforms requires delaying the Wii U version...
Posting of new comments is now locked for this page.