"Tiny Tina is racist", "No she isn't"... this is an actual debate that happened 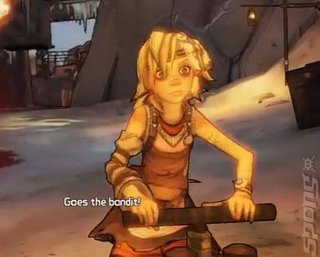 Borderland 2 has a character called Tiny Tina. She is 13 years old, she makes bombs, she likes to kill people. She uses words such as 'badonkadonk'. Guess which bits of that explanation the people on Twitter are getting most exercised about?

Yes, "badonkadonk" and "crunk" used by the young, white psychopath mean that game writer Anthony Burch was called out as racist, and one over-sensitive soul also appeared to believe that, "Its exaggerated stereotypical low class 'black' lingo that with Tina amounts to verbal blackface."

Kotaku has collected the entire exchange which ends sadly for the backbone of the writer who, beaten into submission by the kind of commentor who believes that words are racially exclusive, and that small, white, teenaged pyschopaths wouldn't co-opt any language terms they figured were cool.

His boss, Randy Pitchford points out that, "tina (sic) is not racist because you are not racist. You're a pillar of tolerance and inclusion."

Burch states that, "The last thing I want to be is exclusionary or prejudiced, so if Tina truly is problematic I'll change her." Ok, it's an open-ended non-committal response that has all kinds of get out clauses.

Make up your own mind, watch the video below if you've not played the game.

(BTW here's a clue: She's not racist. Move on, the world really does have bigger issues of racism to contend with)

Ergo 4 Feb 2013 18:00
1/1
IF you have a sense of humor--which rules out vast swaths of the PC-infected Internet--she is HILARIOUS. If not, you bust out the charge of "racism" because, well, what else have you got? Homophobia? I think Tina makes some comments that could be construed that she's a lesbian! Better get on that, losers!
Posting of new comments is now locked for this page.