Aside from that though, Capcom makes some money, 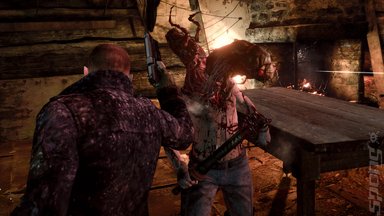 Gamescom 2012
In what is either confirmation of natural gamer conservatism or confirmation that the game was a bit rubbish, Resident Evil 6 did not sell well. Don't believe our word, let Capcom tell you.

We reviewed the game here and came out of the end of it feeling OK. For it's part, however, Capcom had this to say in its recent financial reporting.

"In the Digital Contents business," it means "games", which constitutes our core competence, the flagship title Resident Evil 6 (for PlayStation 3 and Xbox 360), despite recording brisk sales when it debuted, subsequently lost its momentum, resulting in the failure to achieve planned sales and fulfill its role as a driver of sales expansion."

Dang blast it! But there is good news, On the other hand, "Dragon's Dogma (for PlayStation 3 and Xbox 360) enjoyed popularity exceeding expectations in the more profitable domestic market, becoming a million-seller unprecedented among recent new brand games developed and published by the Company. Additionally, the lower-priced Monster Hunter 3 (Tri) G Best Price!" (for Nintendo 3DS) also enjoyed steady growth."