Would love to buy it, if it's cheap. 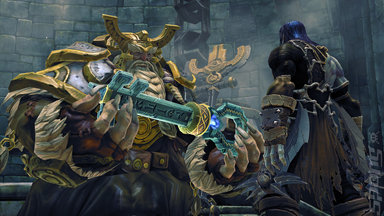 Nobody bought the Darksiders IP, or its studio Vigil Games, during the THQ asset sale this week. That's pretty scandalous. It's probably the most scandalous thing to occur so far this year, in fact! But if words from Atsushi Inaba are to be believed, it appears that Platinum Games is keen on picking up the franchise.

The executive director said on Twitter that he would be interested in grabbing the fantasy action IP, if the price was right. "Oh man, in THQ's big sale it looks like nobody's bought Darksiders ... I'd love to buy that (if it was cheap)," he wrote.

Platinum declined to comment on whether the studio was intending to bid. But if so, it's likely that the Japanese outfit would only be interested in the IP, and not Vigil.

The fact that Vigil failed to find a buyer in the asset sale means that its future is uncertain, remaining part of THQ's Chapter 11 bankruptcy. Lead combat designer Ben Cureton wrote a poignant open letter about the studio's imminent closure on NeoGAF.