Was to be a downloadable title by Ruffian Games. 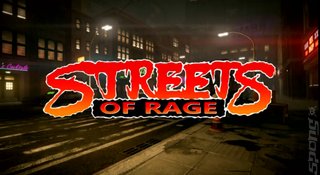 Gameplay footage of a proposed Streets of Rage "re-imagining" has been leaked on the internet. The project was being developed by Ruffian Games and apparently pitched to SEGA as a downloadable title before it was cancelled.

No further details of the game have been revealed, although former Ruffian developer Sean Noonan confirmed that he was involved in the project. "So it seems like one of my previous projects has leaked, as pretty as I remember," he wrote on Twitter.

And pretty it certainly does look. If we were betting men, we'd hazard a guess that the title got canned as a result of SEGA's unfortunate financial crisis back in April. The publisher had revealed a heavy restructuring that would see a focus on mobile and its most popular franchises, and meant that multiple unannounced projects had been cancelled. It would make sense that this was one of these projects.

A crying shame, because it looks great. We've reached out to SEGA for comment, and will let you know if we hear back. Don't hold your breath though - best to watch the video before it gets struck off the internet for good.

Thanks to SEGADriven for the spot!
Companies: SEGA