Thanks to a rubbish TV show. 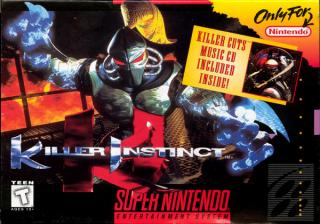 C-C-C-Combo Breaker! Microsoft's attempt to renew the Killer Instinct trademark has failed, after the United States Patent and Trademark Office ruled that the name may get confused with a TV show currently airing on Fox Network.

The TV show in question, according to IGN, is 2005's Killer Instinct, which wasn't very good. Or memorable. We're not sure there's grounds for "likelihood of confusion" there, really, but that's what the USPTO reckons. Specifically, the Fox trademark lists the name as "entertainment services in the nature of a television series featuring drama."

"In a likelihood of confusion determination, the marks in their entireties are compared for similarities in appearance, sound, connotation, and commercial impression," reads a statement on the USPTO website. "In the present case, applicant?s mark is KILLER INSTINCT and registrant?s mark is KILLER INSTINCT. Thus, the marks are identical in terms of appearance and sound.

"In addition, the connotation and commercial impression of the marks do not differ when considered in connection with applicant?s and registrant?s respective goods and services. Therefore, the marks are confusingly similar.

"...Consumers are likely to be confused and mistakenly believe that the respective goods and services emanate from a common source."

Well, balls. How this affects Microsoft's plans - if it had any to begin with - is unclear, but it certainly puts the kibosh on a pure remake or sequel taking place - such a product would likely need to be renamed.
Companies: Microsoft Rare
Games: Killer Instinct