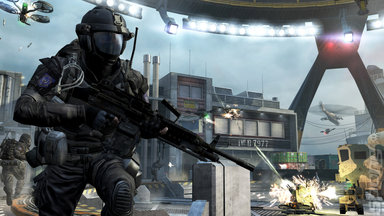 E3 2012
Activision's Call of Duty franchise proves that it still has staying power, as Black Ops II holds on to the top spot of the UK Video Game Chart. This is despite fresh competition from Square Enix's Agent 47. Hitman: Absolution settles for second place.

For the week ending November 24, sales for Black Ops II fell by a colossal 81 per cent compared to the week before. If compared with the second-week sales for predecessor Modern Warfare 3 however, sales are up by 15 per cent. It's all about context, isn't it? At least it would be, if we had hard numbers to go by.

Here's some more no-numbers meaningless-context for you - Hitman: Absolution launch week sales was almost triple that of 2006's Hitman: Blood Money, according to Chart-Track. Good to know, right?

LEGO Lord of the Rings also debuted in the Top 10, landing at #6. If you're looking for PlayStation All-Stars Battle Royale, look further down - #38, to be precise. Ouch. Epic Mickey 2 hit #34. Family Guy: Back to the Multiverse debuted at #35, but nobody cares about that pile of junk.