AM2 trio to hit XBLA and PSN. 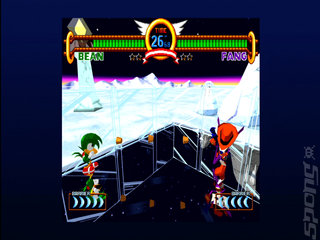 SEGA's ready for a fight next week, as it prepares the re-release of three classic brawlers on Xbox Live Arcade and PlayStation Network. Fighting Vipers, Sonic the Fighters and Virtua Fighter 2 will all launch together - November 28 on XBLA, December 5 on PSN.

All three games will feature Achievements/Trophies and online multiplayer features, SEGA revealed, noting that they are arcade-perfect ports. Each game will cost Ł3.69 on PSN and 400 MSP on Xbox Live.

Strangely, PlayStation Network in the US gets the trio a little earlier than the Europeans, launching on November 27 for $4.99 each. PC wasn't mentioned in the release schedule.

Virtua Fighter 2 saw an initial arcade release in Japan in 1994, before being ported to the SEGA Saturn. Sonic the Fighters and Fighting Vipers were spinoffs that were based off of Virtua Fighter's game mechanics. The former was an arcade rarity, only seen in Japan in 1996, before getting a release on Gamecube and PS2 via Sonic Gems Collection; the latter hit arcades in 1995 and saw a SEGA Saturn release shortly after.
Companies: SEGA
Games: Fighting Vipers Virtua Fighter 2