Graftgold classics due for revamp as well as new original motorsport titles. 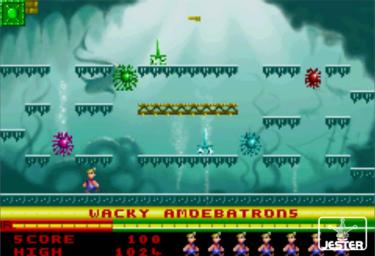 All Images (11) »
North Wales-based developer Jester Interactive is to launch its own games publishing operation. The Jester brand will be used to publish titles on all major gaming platforms, and most notably, for veteran gamers at least, Game Boy Advance. Why? ?Cos Jet Set Willy and Manic Miner are on their way!

Jester Interactive has secured the entire 23-game back catalogue of veteran developer Graftgold and now holds the rights to some of the best-known video games of all time. Along with the aforementioned Manic Miner, set for release in April, and Jet Set Willy, expect Jester to come up with GBA versions of Paradroid and Uridium later in the year.

Jester's Game Boy Advance update of Manic Miner mixes old with new. The original game's 20 stages have all been recreated down to the last gameplay nuance with old favourites such as 'Eugene's Lair' and 'Attack of the Killer Telephones' identical to those of the classic ZX Spectrum version. The handheld game also contains additional new stages, and has undergone a graphical makeover to bring the game bang up to date.

"Jester has long been renowned for creating original and entertaining product. With our strong organisational structure and key licences, we are now ideally placed to take advantage of the expanding video game market" commented Jester Interactive CEO Gavin Morgan.

Easter also sees the release of Super Trucks for the PlayStation 2, quickly followed by the official Isle of Man TT game, both original titles, and both with the full licenses and co-operation of the respective sporting bodies. And that?s not all. Also later this year, there will be an updated PC version of Music, a special edition endorsed by one of the UK?s leading superclubs, as yet unnamed.

"Titles such as Super Trucks and the Official Isle of Man TT will continue our enviable reputation as producers of quality entertainment software and also demonstrate an eye for a franchise that could equal anything else in the marketplace," continued CEO Gavin Morgan.

"Similarly, in acquiring the back catalogue of Graftgold titles we have a ready-made series of classic games just waiting to be updated for modern tastes," he continued. "Good gameplay is something that never dates, and we are looking forward to reinventing the likes of Manic Miner for today's games players. And with the new incarnation of Music rounding off our initial batch of titles we are extremely excited about the year ahead."

Here are some early screens from the GBA's Manic Miner and Super Trucks on PS2. You can work out which is which, can't you?
Companies: Graftgold Jester
People: Gavin Morgan
Games: Jet Set Willy Manic Miner Super Trucks