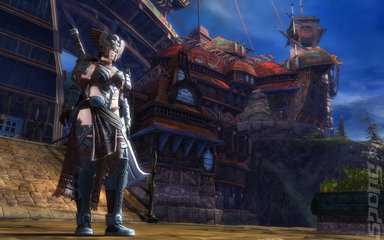 Oh NCsoft, you are really spoiling us. Guild Wars 2 is due to get its second major content update in the three months that the game has been on sale. Titled The Lost Shores, the new expansion pack will play host to a "one-time world event" that will change the face of the game's planet of Tyria forever, apparently.

The expansion pack will launch on November 15, and will include a new zone to explore, a new PvP map, new dungeon, crafting updates and new equipment. The aforementioned mysterious event - where consequences will never be the same - will begin on Friday, November 16, and run through to Monday November 19.

Obviously, NCsoft wants its MMO to conquer the world, so has launched a new friend referral program too. Starting today, players will be able to invite three mates to join a trial period for Guild Wars 2, which will last between November 15-18. Guesting is now included in a new update, and is free.

Lots to get excited about for Guild Wars 2 this week... we wonder if NCsoft is trying to pull attention away from any other games that might be coming out soon...
Companies: NCsoft Europe
Games: Guild Wars 2