Maybe a bit of both. 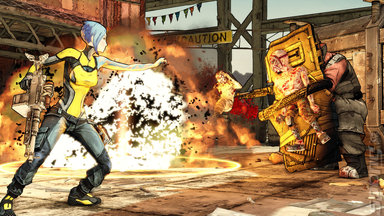 Gamescom 2012
Gearbox has responded to player concerns regarding unexpected permanent deaths and strange online behaviour in the Xbox 360 version of Borderlands 2. A solution is on the way - but it seems that the cause of the disruption is a combination of both user modding and simple coding oversight.

Community Manager Chris Faylor (ChrisF) announced on the Gearbox forums last week that "a few users have begun violating the Xbox Live Code of Conduct by using an external application to maliciously disrupt the experience and sabotage characters of legitimate Borderlands 2 players on Xbox 360. Fortunately it’s easy to avoid this scenario.

"After extensive internal testing, an update to prevent this disruption has been submitted to Microsoft and will be released as soon as possible. Until then, concerned Xbox 360 players of Borderlands 2 should consider playing online with trusted individuals in non-public sessions. This does not affect players on PC or PlayStation 3."

Forum posters responded with an alternative explanation for the disruption - the toggling of a 'Hardcore Mode' in a user's character profile, which appears to only be accessible via save game modifications. With this mode activated, a user can trigger various effects such as powerful enemies and permanent death. The side effect? It can result in deleted character saves - and can be spread like a virus to other online players without their knowledge.

The conclusion that many Borderlands fans are drawing here is that, while the effects are being caused by user modding (which is against Microsoft's Xbox Live Terms of Service anyway), such experimentation is being spread due to a lack of coding failsafes.

The debate rages on - for many pages - in the Gearbox community forum.
Companies: Gearbox
Games: Borderlands 2