"We can't stand still, or we'll get punished." 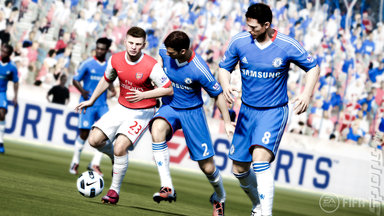 FIFA 12 scored two goals at the Golden Joystick Awards tonight, scooping Best Sports Game and Outstanding Contribution. With its Japanese rival, Pro Evolution Soccer, revamping its physics engine in preparation for the next generation, will EA Sports do the same? Perhaps it doesn't need to.

VP of Northern Europe, Keith Ramsdale, feels that FIFA is innovating all the time, thank you very much. "Quite frankly, you can?t do anything but innovate," he told SPOnG. "I think the real reason why we won two awards tonight for FIFA is... you can't keep consumers and fans engaged unless you innovate time after time after time.

"Making a great game is tough. To make a great game every 12 months, led by David Rutter and his team at Vancouver, is frankly nothing short of astonishing." Ramsdale added that the teams at FIFA are constantly listening to fan feedback, and incorporate as much of that as possible into the next iteration.

"The ability to create and innovate is restricted only by imagination right now," he concluded. "The teams have created fundamental changes in the way the game is played. And some of them may be quite small, but it?s still fundamental - things like collision.