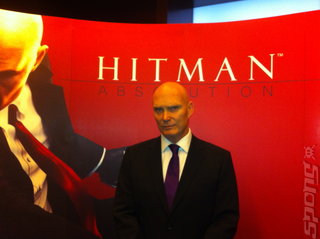 Hitman Absolution voice actor David Bateson - the actor who has performed as protagonist Agent 47 throughout the entire franchise - has opined on the 2007 film starring Timothy Olyphant.

While he didn't comment on the film specifically, he did suggest that game-based movies often get a fundamental understanding of the source material wrong. When asked by SPOnG at the Golden Joystick Awards if such movies could end up damaging the reputation of the games, Bateson replied, "Ooh, that?s a good one because... well, yeah. That?s the short answer.

"The whole Hitman franchise really demands a lot of you, the player. Especially when [the first game was released and] it went the other way to a lot of [standard] shoot?em ups. A game where you have to shoot as few people as possible. What? I have to use my brain? So that created a new demand or set of parameters for the audience.

"And then, in a way, you go and ruin it by making something extremely public, like a film. So on the one hand you think that this gives publicity for the game, but... it?s like a book being turned into a film. It?s never going to satisfy the readers. Whether the film is good or bad."

Bateson stopped at commenting on the quality of the Hitman film itself, simply stating, "I think I?ll reserve judgement on the film itself. [Timothy Olyphant] is a good actor. But I thought he was inappropriate when you saw him without hair. It just looked like, ?Does your mummy know where you are?? It didn?t have the weight."