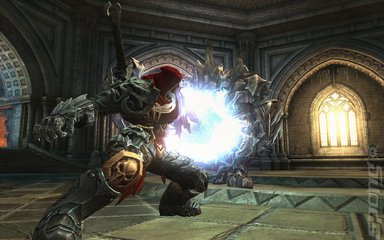 Darksiders creative director Joe 'Mad' Madureira has upped sticks and left his position at Vigil Games, to focus on his return to the comics industry.

The departure was nothing less than amicable, however - Madureira told the world of his leave on Twitter, and seemed to have a lot of love for the development studio and THQ.

"So long @Vigilgames @THQ thanks for all the memories," he wrote. "Darksiders was definitely a career highlight. Keep on kicking ass I'm a fan for life!" He later revealed on Facebook that he plans to hop back into the comics world with his 'Next Big Thing'.

"I could not be more proud of what we achieved, or the awesome people who helped build up this studio. I can safely say Vigil's future is in very good hands, so expect only awesomeness down the road. This feels surreal...I miss the place already," he noted.

"I'll be talking more about 'The Next Big Thing' in the coming months, but in the short term, I'm focusing on banging out a bunch of comics. Which should hopefully sate your hunger, you bloodthirsty savages!!! (*believe it or not that's a term of endearment)."

Mind you, it seems like he's already thinking about reviving the popular Battle Chasers. In a saucy tweet to his followers, "Okay, the obvious answer is ?both? but if you had a gun to your head... Battle Chasers game? OR more BC comics? #decisions #curious #hmmm"