Vivendi Universal have a little some?thing? for us 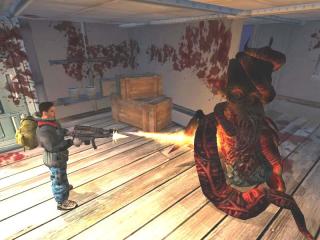 All Images (7) »
Attendees of this Saturday?s John Carpenter all-nighter at the Curzon Cinema, Soho, London ? just one of many events taking place during the Sci-Fi London Weekend ? will be given an early look at Vivendi Universal?s and Computer Artworks? The Thing, due for release in Q3, 2002, on PC, PS2 and Xbox. As if the Carpenter films on show weren?t enough of a draw for science fiction and horror fans, gamers can now look forward to the between-film trailers. The whole shebang starts at midnight, February 2, running through to 8AM, and features the films They Live, Dark Star, Escape From New York, and Carpenter?s remake of The Thing itself.

Billed as a survival horror story, The Thing, the game, picks up where the film left off, and features a whole new cast of characters. Players assume the role of a military squad captain, sent into the frozen Antarctic to investigate the mysterious deaths of a scientific expedition. But the burning questions are; Are you a trustworthy leader? Are your fellow soldiers really on your side? Are they even human?

London-based game developer Computer Artworks, Ltd. has created a revolutionary gameplay mechanic never before implemented in the survival horror genre: an advanced trust/fear interface enabling you to monitor the psychological states of the non-playing characters which in turn determine whether these characters co-operate with you. Unlike most survival horror games, The Thing demands that you work with your increasingly suspicious team-mates, relying on wits and an arsenal of weaponry, including flame-throwers and machine guns, to escape infection and finish the game with your squad intact.

"The Thing is a phenomenal license that lends itself incredibly well to adaptation as a game," said Jim Wilson, President of Universal Interactive. "This innovative, multi-platform title provides fans of The Thing the sequel they have been waiting to see for 20 years."

The ultra-realistic 3-D game also features groundbreaking snow and lighting effects, subtle sound cues and some of the most hyper-detailed and truly horrific creatures ever to grace the gaming screen. The Thing is difficult to see, hard to kill and seemingly impossible to evade. Are you ready? You have until Quarter 3 this year to see if you are, and if the game has a similar impact to the Kurt Russell-starrer from 1982, survival horror fans are in for a few jumpy moments.