Borderlands Making its Way to Apple 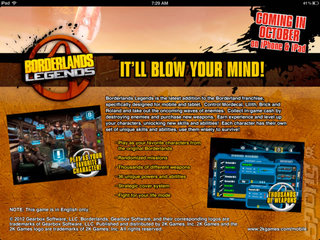 Imagine, if you would, producing a highly lauded, really quite popular video game on home console and then - because you're an abject pillock - not putting something to do with it on iPhone or iPad or iPod Touch? Imagine? Well there is no need to imagine any enormous abject pillocks working at 2K Games.

This is because - according to an advert posted on an official forum by someone not official - Borderlands Legends is coming to iOS devices after all.

The forum is over at Gearbox which develops the Borderlands series and employs no pillocks that we're aware of either. The game is Borderlands Legends and it is coming in October.
Companies: 2K Games Gearbox
Games: Borderlands 2