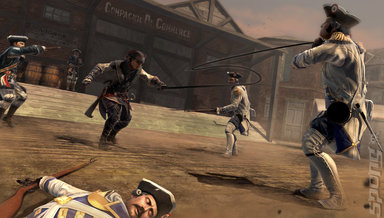 Gamescom 2012
Those of a certain age will remember Aveline as a Scouse character from a BBC comedy/drama series called Bread from the 19980s or maybe 1990s or both. Well, you can add Ubisoft's Aveline to your list of fictionals... called Aveline now. And this one has a new video.

Yup, the PS Vita tie-in to the Assassin's Creed III line-up is coming and it stars, "A woman of conviction, Aveline (who) is fighting for freedom in 18th century New Orleans ? a city on the brink of a rebellion as the Spanish Empire imposes its new rule."

Check out her video below: