More people walk into a shop to buy a football game. 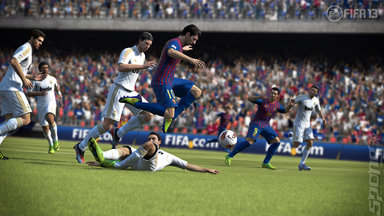 If you go down to the shops today, you might get a big surprise. Despite high profile launches of Bethesda's Dishonored and 2K Games' XCOM: Enemy Unknown, it appears that FIFA 13 has won the majority of gamer's hearts for a third week running.

As the official records stand, Dishonored settles for second place in the Top 10, despite hyper-positive reviews from critics. Pokémon Black and White 2 debut in #3 and #5 respectively, but according to UKIE Chart-Track even the sales of both versions combined couldn't displace silent steampunk assassin Corvo from his #3 position.

XCOM lands at #7, which is impressive going at retail considering that it's an update of a classic, some might say long-forgotten genre in gaming. Certainly, one that has failed to really work so far in a console environment. Perhaps when word of mouth circles that XCOM has broken the mould and is pretty great, things might pick up.

Take into account that the UK Video Game Chart, in its current form, does not take into account digital sales. This means that purchases of titles using something like Steam have not been included.