Bridgestone: That's Not Kevin Butler in Our Advert

Denies Sony has any protectable property in the character. 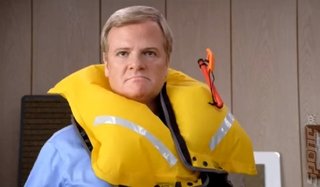 Bridgestone Tires has hit back at Sony's claims that it used PlayStation marketing mascot 'Kevin Butler' for an advertisement that features a Nintendo Wii.

Sony filed suit against Bridgestone, as well as Kevin Butler actor Jerry Lambert, on September 11th. The issue was over Lambert's appearance in the commercial, where he is seen in a lab coat enjoying a game of Mario Kart Wii. He was later removed from sight using video editing tools.

But it's not Kevin Butler, according to Bridgestone. "Mr Lambert is one of the actors who appeared in the commercial as a Bridgestone engineer," a statement reads.

"Bridgestone denies that Kevin Butler appears in the Bridgestone commercial discussed herein and thus denies that he speaks or does anything whatsoever in the commercial." As a result, the company rejects Sony's claim that it has any protectable property interest in the ad whatsoever.

According to the Hollywood Reporter, the ad was aired three days after Lambert's contract ended with Sony - but said contract contained an exclusivity clause that would prevent the actor from providing similar services or his likeness to competing products.

Must be hard keeping to such an agreement when you can't really change your face. Bridgestone intends to fight the suit.
Companies: Sony
Games: Mario Kart Wii