Footie game stays at the top of the chart. 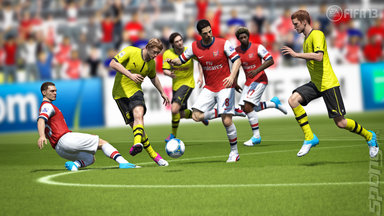 Gamescom 2012
Electronic Arts scores another goal, as FIFA 13 maintains its vice-like grip on the top of the UK video game chart. Capcom's Resident Evil 6, despite an impressive debut week spot at #2, failed to scare the footballers away from its place in the Top 10.

FIFA's continued reign comes as week-on-week sales plummet by a whopping 72 per cent. As for Resident Evil 6, UKIE and GfK Chart-Track revealed that the zombie-blasting action game became the fourth-biggest release of the year, behind FIFA 13, Borderlands 2 and Mass Effect 3.

In other chart news, Ubisoft's Just Dance 4 lands, rather appropriately, at #4, while 2K Sports' NBA2K 13 debuts at #6. Towards the bottom of the Top 10, there's not much movement - Skyrim and Rocksmith remain in their places while PES 2013 and Sleeping Dogs slip down to the bottom of the table.