ZombiU will get a console bundle pack. 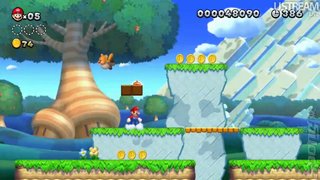 New Super Mario Bros. U and Rayman Legends will be among the first titles to hit store shelves alongside Nintendo's upcoming Wii U console - but don't expect Pikmin 3 to be accompanying them.

Both Mario and Rayman have been revealed as launch-day releases, hitting on November 30 with the Wii U. Other launch titles announced during the Nintendo Direct conference include ZombiU, FIFA 13 and Mass Effect 3 Special Edition - the latter of which will come complete with an interactive comic book.

ZombiU in particular will include a message system inspired by Demon's Souls, and a ZombiU Premium Pack will also be released for those who want to grab the game and the console at the same time.

But Pikmin 3 will be hanging back for a 2013 release - a shame for those holding on for some Pikmin-plucking action.

More launch titles are sure to be announced - we will update as and when we get confirmation.
Companies: Nintendo