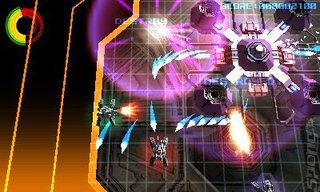 As you can see in the trailer below, Kokuga isn't your average top-down shooter. A card-based system has been implemented that allows players to launch devastating attacks when co-ordinated. 20 cards are allocated at the start of each stage, with four random cards from this deck usable from the 3DS touch screen.

Creator Hiroshi Iuchi, along with developer G.rev, are working towards a September 27 release in Japan. It had better come out in the West, or we'll have to make do with shooting things with our Nerf guns. And it's just not the same. That, and it annoys others.