Here and only here: MOH future revealed. MOH 3 discussed for the first time! 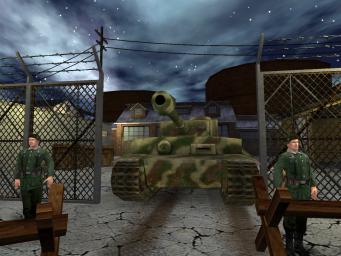 All Images (11) »
One of the speakers at the recent Medal of Honour Expo held at The Imperial War Museum in London was Rick Giolito, Executive Producer for the MOH series at Electronic Arts.

We were plucky enough to snag the only interview with the man in charge of the seminal shooter series, in which some very interesting details were uncovered about the future of the franchise.

Question: In making the transition to PC, what new challenges did you encounter, particularly in respect to large-scale multiplayer gaming, which is seen for the first time?

Rick Giolito: Well, that was one of the most exciting things about moving it to the PC, we have always had multiplayer in MOH, one-on-one in the PlayStation version. We wanted to take it to the next level and found that on the PC, using the Quake 3 engine, we were able to deliver up to 32-player multiplayer, with eleven multiplayer levels and four different kinds of gameplay. It?s pretty extraordinary.

Q: How do you think the fanbase will react to this?

RG: We already have a huge PC community that, following the release of the multiplayer demos, set to work building mods and so on, so we have the infrastructure in place to support the game, along with EA's global support, implementing servers so that everyone has a great connection and actually, it turned out better that I ever could have expected.

Q: How did you deal with the ethical implications of releasing such a realistic World War 2 title?

RG: The ethics of doing a WW2 game are solved simply by being authentic, not taking it outside of what really happened. The truth is that WW2 has more stories than I could ever tell in a hundred years, more exciting than anything anybody could dream of and we just stayed true to our roots and we don?t have a problem.

RG: We tried to take the new games to the next level, introducing true squad-based play where you will be working on screen with friendly non-player characters with their own AI, that will work with you, go in front, go behind, cover you, and so on. With that we added several new weapons. We then decided to take on D-Day, something that we didn?t feel we had the technology to do until now. There will be levels based on moving trains, riding side-saddle in a Jeep, and tank-battles, something that we?ve never done before. You will be able to steal a King Tiger tank and do battle with the German forces.

Q: What do you think of the competition, especially Return to Castle Wolfenstein?

RG: So, you?ve asked me a loaded question. What do I think of Wolfenstein? Well, I play a lot of Wolfenstein and I really enjoy what they are doing, however, it?s a different game. Wolfenstein is a 3D arcade shooter that stayed close to its roots of the original Wolf? 3D. They?re shooting zombies and guys with no legs and they have women doing cartwheels, things that would never have happened in World War 2, they can have that space, that?s not what we do. We stay true to WW2, authenticity, accessibility and we feel that WW2 is so rich an environment that we don?t need to do that kind of thing. The other thing that I would say in comparison is that we spent a lot of time making sure that you really care about the other characters on the screen, and that?s not where Wolfenstein?s strength lies.

Q: What about the future of the Medal of Honour series?

RG: The MOH series, I can tell you, has a very strong future across new platforms. Presently we are planning an Xbox version of Allied Assault, and we are thinking about a GameCube version, but we need to see where the demographic for the hardware lies.

Q: What does Nintendo head office think of that?

RG: Nintendo would love to see Medal of Honour on their system, or I believe they would because it?s so popular. Its appeal might help them draw an older fanbase to GameCube, but its important to do different things per platform, not just great ports of older versions. As far as the franchise goes, we did an interesting job of portraying Americans and Germans, so we?re going to bring in other countries. The next version, Team Assault, due out in October for the PC, will include Russian, British and Italian troops, we?re going to really expand. In 2002 we will be releasing Medal of Honour 3 for PC, PlayStation 2 and hopefully GameCube.

Q: What about handheld versions?

RG: I just saw the first build of the Game Boy Advance version of Medal of Honour Underground and I can tell you it?s gonna be great! I haven?t told anyone else about that yet so you have it first.
Games: Medal of Honor: Allied Assault Medal of Honor: Frontline