Joins the ever growing army of F2P business modellers... 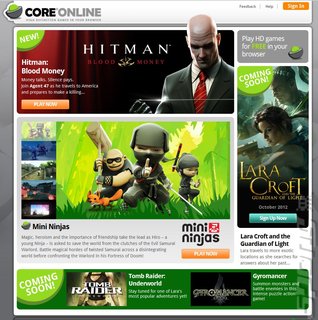 All Images (2) »
Square Enix is heralding its F2P, cloud gaming initiative Core Online with a big media blast about Hitman: Blood Money (details on the original in case you've never played it are here). It's quite a big deal.

Square's offering - in beta - is called "Core Online". As well as the version of url=http://spong.com/game/11038639/Hitman-Blood-Money-PC]Hitman: Blood Money[/url], you'll also find Tomb Raider and The Guardian of Light and Mini Ninjas... these are "in HD" and they are for free as you can see in the video below.

Neatly, this doesn't appear to be a bog standard web-interfaced Flash games set. You can store game saves and achievements in Square's part of the cloud. What's the catch? Simple really, you have to watch adverts unless you decide to buy games or even levels.

Check it out. It will turn into much bigger news than you expect.