Although 200,000 people have bought the game - people are being laid off. 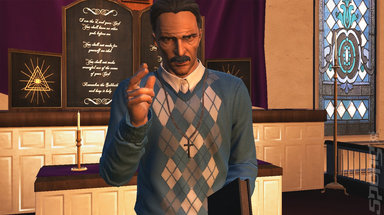 Funcom has released its financials for its second financial quarter. Right up top are the words, "Initial sales of The Secret World have been below expectations..." But given the amount of twitter blather from game journoes about the game, why should this under-performance have happened?

Firstly, Funcom states, "The Company still considers it likely that sales for the 12 months period following launch of the game will be less than half of what was presented in the Conan-like scenario in the 1Q presentation." So, over-promising is one key.

The company also states that, "Press feedback on The Secret World has been mixed, with some major press outlets in the US having rated the game as low as 50%, which have impacted sales of the game significantly." Interesting this one given recently accepted "fact" that with blogs galore, actual review scores don't mean anything.

But there is also the competition, "The week before the launch of The Secret World", says Funcom, "NC Soft announced the launch date for Guild Wars 2 to be the 28 August. Blizzard followed up the week later with announcing a 25 September release date for the new expansion to World of Warcraft Mists of Pandaria. Both of these announcements have impacted sales of a new brand like The Secret World further."

So, what to do given that "More than 200,000 players have purchased The Secret World and the Company is about to launch several initiatives to acquire more players..."?

First up, "Due to the expected lower initial revenues from The Secret World... the Company has implemented significant cost cut initiatives, involving reduction of personnel. Going forward, the Company will carefully consider the need for further cost reduction measures aiming at bringing the company into a cash flow positive situation."

Shane K. Firth 29 Aug 2012 13:41
2/4
Arenanet has it right - produce a top class game that also happens to be a brilliant MMO and don't charge for it monthly... I can see it being a game i spend silly amounts of time with, but i don't feel like i have to play because of a sub.
more comments below our sponsor's message

Chen 30 Aug 2012 07:08
3/4
I played the beta and the game was EXTREMELY laggy (compared to how smoothly GW2 runs) and combat was lame. The storyline was good, but that's about it

Dthrevan 31 Aug 2012 07:50
4/4
Wanna know the real reason it is failing? It's because Failcom has such a poor rep after AoC. People have lost faith in this company and many, myself included would never buy a Failcom game again.
Posting of new comments is now locked for this page.