Romero: Everyone at id Software Had a Hard Time With Doom

It's not easy making ground-breaking games. 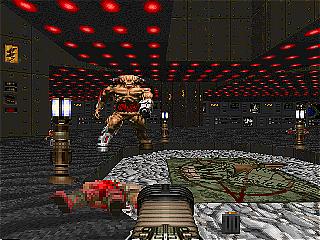 John Romero once tried to make you his bitch. But what kept the bitch-maker up at night when working on the legendary id Software shooter, Doom? Turns out, he had trouble "coming up with the unique abstract level design style." But he wasn't the only one who had problems during development.

"Each person on the team had a hard time with whichever aspect they were working on," Romero said in response to a question on Quora. As well as abstract level design, he added that his troubles included "staying away from the Wolfenstein 3D style of level design.

"For John Carmack, it was probably dealing with the new world data structure (no more tile matrix, now it's line segment and sectors), figuring out how to speed up the rendering of the world through BSPs, and implementing multiplayer mode smoothly over serial/modem.

"For Adrian [Carmack] and Kevin [Cloud], it was probably trying out a new way to create our characters. First, Adrian used clay to model the player and Baron of Hell, but when he tried animating them, they tore apart. So he had to switch over to latex models, which we outsourced. We were using a video camera to capture the models on a lazy susan so we could have 8 rotations, then animate the model, and capture all 8 rotations again. Cleaning up all those frames of art was tedious. We were also using a NeXT Cube to do all the video capture."