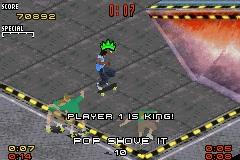 All Images (8) »
Activision has released the latest batch of screens from what may prove to be one of the best handheld games ever. We are, of course, talking about Tony Hawk?s Pro Skater 3 for the Game Boy Advance.

This latest portable kickflip-em-up will be a first in as much as it will closely mimic the GameCube and PlayStation 2 versions. The maps and levels of interactivity, like cars and people, will be included, but best of all, the routes for combos will remain intact. This means that skills picked up when playing the home versions will be as useful when you?re on the move. Other good news is that landing tricks such as revert have been included, meaning that massive scores will be possible!

Tony Hawk?s Pro Skater 3 for GBA features six levels: the Foundry, Rio, Suburbia, Airport, Tokyo and LA, all of which will be closely modelled on the original home maps.

Multiplayer is also included, meaning that with the aid of a link cable, you can enjoy Trick Attack, Horse, Tag and King of the Hill matches with a friend.

Tony Hawk 3 for GBA is due for release on March 28.