Star Wars 1313 is "For Adults, Not Psychopaths" 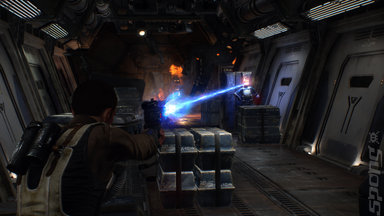 It's quite depressing when game developers prop up the whole "video games cause violence" myth. Or perhaps Star Wars 1313 creative director Dominic Robilliard just wants to tread on eggshells so he doesn't get seen as a potential contributor to such violence by crazed MPs and Jack Thompson. In any case, he feels he has a "responsibility" to not be too gratuitous.

"We had a lot of questions from people saying: mature Star Wars? Does that mean we're going to see blood and guts all over the place? That's not it at all - it's not what we're shooting for," he tells OXM. "I don't think that would ever fit in Star Wars, really."

Fair enough. But then Robilliard gets a little strange. "When you can render characters that look like the ones in our game - and other games - you get to this realism level where you really don't want to encourage that kind of thing," he adds. "That kind of thing" referring to the alleged glorifying of violence in video games.

"Seeing that kind of reaction from gamers... It may well be human nature, but you don't want to put content out there that pushes those buttons." The kicker is from VFX supervisor Kim Libreri, who concluded. "It's for adults, not for psychopaths."

Thanks for clearing that up. We'll keep all of our psychopath friends from playing this game, then.
Companies: LucasArts
Games: Star Wars 1313