EA sticking up for its little guy. 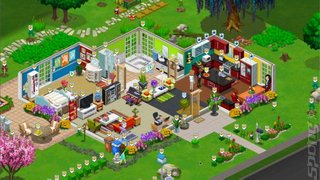 Mammoth games publisher Electronic Arts and social gaming upstart Zynga have never really been on good terms. But now it seems that EA has had enough and filed a copyright infringement lawsuit against its rival. The reason? Zynga's new title, The Ville, which is argued to be an "unmistakable copy" of EA's The Sims Social.

The lawsuit was filed by EA, on behalf of Sims developer Maxis, and claims that "Zynga has wilfully and intentionally 'copied and misappropriated the original and distinctive expressive elements of The Sims Social in a violation of U.S. copyright laws." The Sims Social launched on Facebook in August 2011.

General manager of EA's Maxis Label, Lucy Bradshaw, laid down the gauntlet on the company's official blog: "The legal reasons are solid. But for creative teams who feel that their hard work and imaginations have been ripped off, there?s obviously an emotional element too.

"As outlined in our complaint, when The Ville was introduced in June 2012, the infringement of The Sims Social was unmistakable to those of us at Maxis as well as to players and the industry at large. The similarities go well beyond any superficial resemblance.

"Zynga?s design choices, animations, visual arrangements and character motions and actions have been directly lifted from The Sims Social. The copying was so comprehensive that the two games are, to an uninitiated observer, largely indistinguishable. Scores of media and bloggers commented on the blatant mimicry.

"This is a case of principle. Maxis isn?t the first studio to claim that Zynga copied its creative product. But we are the studio that has the financial and corporate resources to stand up and do something about it."

This is going to get messy.
Companies: Electronic Arts Zynga
Games: The Sims