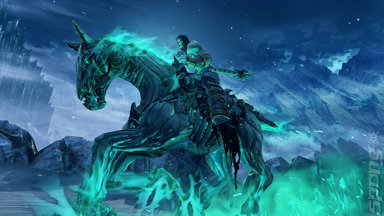 Looks like we were right - Darksiders II will offer special bonus items through its Serpent Tome feature. One of the methods of getting some extra equipment? Simply play the original Darksiders.

THQ has announced that, by just playing Darksiders, you'll unlock a level five legendary armour piece called the Pauldron of the Horsemen in Darksiders II. This boosts all of Death's stats, including critical damage. If you've completed War's story, you'll have the Chaos Fang waiting for you in the sequel - this scythe increases Death's damage.

You can get Darksiders on Xbox Live Marketplace or PlayStation Network right now, if the thought of wandering to town and grabbing a disc doesn't appeal to you. Go forth and get those goodies!