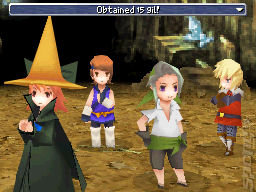 Square Enix has now thrown its hat into the Ouya ring, by announcing that RPG classic Final Fantasy III will be made available at launch for the Android-based gaming console.

A free-to-try demo will be released, alongside a full version of the game to purchase if players feel satisfied with the game. Originally released in 1990, the Ouya version of Final Fantasy III will in fact be an updated version of the 2006 remake, which featured 3D graphics. "Renewed controller support" will also be included.