Times are tough for rapper.... nope, his name sells schizzle 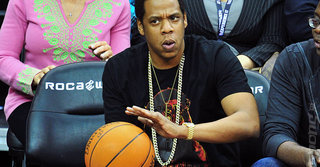 Uber-duber hip-hop star and basketball team owner Mr Jay Z has managed to elicit much reaction from his fans with the news that he is to Executive Produce NBA 2K13.

Mr Zee (as opposed to Mr Zed) already owns a chunk of the Brooklyn Nets (geddit?) basketball team and apparently plays video games in between making vast chunks of cash and rapping.

His announcement on his own website of this latest gig has, however, lead to some mixed reaction among his fans.

The ever analytical Itsmrpressplay points out, "This looks ill, Hov you did it again."

Marlo Stanfield, however, is more to the point simply supporting Mr Itsmrpressplay with the statement, "Dope."

We have to defer to Mr LikR however, whose analysis rivals that of Mr Michael Pachter when he says, "This is gunna be an ill basketball game 2k12 was hot but this ones gunna be ill... i played 2k12 the other day at my boyz house he had the downloaded rosters so i ran with the Brooklyn nets he had the knicks when i tell you it was a hell of a game i mean it! he caught a lil 4th quarter run an i took the L by 4 but shit it was a good one , cant wait! big up jayz!"