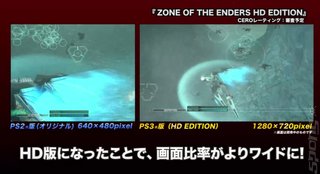 Enjoying all those PS2 HD remasters on your PlayStation 3? Well, there are more coming in the way of Okami, Zone of the Enders and Yakuza - and Sony has released a promotional video that details just how much of an improvement you can expect to see in these upcoming revamps.

Side-by-side comparisons of the PS2 original and its updated PS3 counterpart feature prominently in the video, which includes stunning renditions of gameplay and cinematics.

Ratchet & Clank is also showcased in the video, but this is already available to purchase in the UK - it hits the US on August 28. Okami is expected to have a Western release in the Autumn, while Zone of the Enders should be arriving by the end of the year. Yakuza is so far only confirmed for a Japanese release.

See the video below.