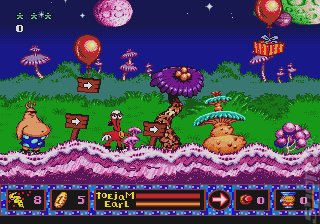 SEGA fans will finally have their wish fulfilled, as it appears that Mega Drive classics ToeJam & Earl and ToeJam & Earl in Panic on Funkotron may finally be seeing a re-release on PlayStation 3.

According to sources on Siliconera, the games - originally released in 1991 and 1993 respectively - will be released as part of SEGA's Vintage Collection.

The ToeJam & Earl games have been on the top of many a SEGA fan wish list since it became apparent that the company was willing to re-release its most popular titles en masse. Apparently, IP licensing issues had prevented the two funky aliens from even making cameo appearances in games such as Sonic & SEGA All-Stars Racing.

If Siliconera's report is accurate, it would be safe to assume that SEGA has tracked down whoever owns the rights to ToeJam & Earl and managed to make them see sense in relinquishing control over a re-release.