Advertising Standards Authority gums the hell out of Activision 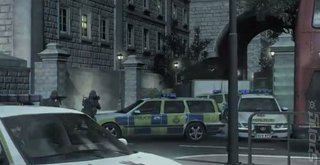 Remember the advert for Call of Duty: Modern Warfare 3 that aired during a Premier League football game at 2:30pm on November 6th 2011? Well, one parent and their kids do... and they complained.

Well, technically of course, the parent complained... to the Advertising Standards Authority (ASA) in the UK. The complaint went something like this

"Two viewers challenged whether the ad was inappropriate for broadcast during the day when children would be watching. One of the viewers reported that their children, aged between two and four, had been frightened by the ad."

Activision said, "...the ad had been given an ex-kids restriction by Clearcast and that this classification was passed on to their media buying agency and the relevant broadcasters. The ad had been broadcast on Sky Sports 1 at 2.30pm on Sunday 6 November 2011 during a premier league football match. Activision understood the transmission of the ad at this time fell within the ex-kids restriction since it was not broadcast before, during or immediately after a children's programme. They explained that the ad was a specially revised edit to satisfy the ex-kids football spots that were booked as part of the campaign. They said it was a full gameplay ad with all violent and threatening content removed. They said the ad was also rated by the British Board of Film Classification (BBFC) for in-store use and had been given a PG certificate."

The ASA upheld the complaint, stating that "The ad breached BCAP Code rules 5.1 (Harm and offence) and 32.3 (Scheduling)."

It also used its bulldog powers of enforcement to state that the eight month old ad, "...must not be broadcast again before 7.30pm."

See the trailer in question over here if you're old enough!