It's our Makuhari Messe so there! Sega GT bad news update inside 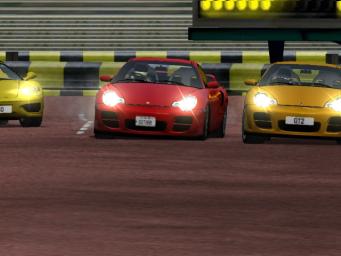 The name Makuhari Messe might ring a few bells with some of our more astute readers, as it has been the venue for the Tokyo Game Show for some years.

It seems that no one told the Japanese motor industry that it doesn?t have exclusive use of the floor space as, along with Honda, Toyota and Subaru are Capcom, Microsoft and Sega!

There are three brand-new racing games at the event in playable form, namely Capcom?s awesome cell-shaded Auto Modellista for PlayStation 2 and the Xbox duo of Sega GT 2002 and Project Gotham.

Project Gotham is complete and Auto Modellista is said to be running well and looking impressive. Unfortunately, Sega GT is somewhat off the mark.

There is still only one playable track and a handful of cars available, and the AI has not been improved from the initial build. From what we can gather, it?s the same build we played at the TGS and X01 in Cannes, fuelling speculation that the game is in dire straits.

More as we get it.
Games: Project Gotham Racing Sega GT 2002 auto modellista