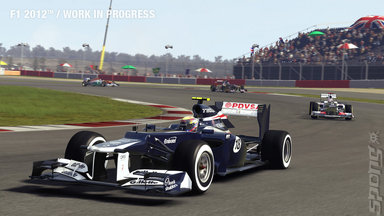 Codemasters F1 2012 director Stephen Hood has jested with SPOnG that if "Sony would chuck $10 million at us to do that, then sure we'll do it!" with regards to PS3 and Vita cross-play

In a forthcoming interview, Stephen Hood, responds to the following question: "Are you planning any interconnectivity between the PS Vita and the PS3 for that version of F1 2012 and beyond?"

"No", he states, "because it would benefit one format only and it's not something we're particularly interested in doing. We're making the games we want to make and not what the marketing department wants to make. We only get away with doing that because the F1 games are selling."

But he can't help but add.

"Now, if they were not, then we may have started to plough that furrow. It's not on the cards, but it is something that has been discussed and it comes under a list of features we would like to see, but it would likely come across as a bit of marketing. Is such a feature going to add to the experience? Probably not. Now if Sony would chuck $10 million at us to do that, then sure we'll do it!"