After the uproar... the back-story 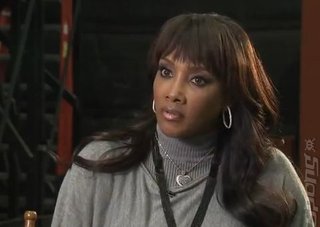 Vivica Fox
All Images (3) »
Fair enough, we've had the uproar about *that* Hitman: Absolution trailer and we've had yet another Special Edition (with cuteness) and now we've got not one by two videos explaining the controversial Nuns with Guns aspect of the game.

Basically, the two vids differ in that one is animated and one is an actual person. They both explain the background to the slaughtered, rubber clad gang of women who ended up trussed up in rubber nun costumes and killed by Agent 47 as he goes through his long dark night of the soul.

The gang is called The Saints (and not The Rubber-Trussed Nun'o'grams for some reason). Apparently the ladies went through traumatic prison times, before being dragged together... in a deadly team of assassins who then all get slaughtered by Agent 47. All except the leader of gang - who is voiced and played by Vivica Fox and who gives an interview about this role in the video.

She is, we're told "An American actress best known for her roles in Kill Bill, Batman & Robin and Independence Day."