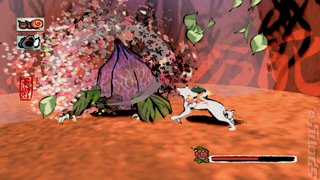 Rejoice! Capcom is remastering cult PS2 classic Ōkami for an exclusive release on PlayStation 3 this Autumn, Sony has announced. Ōkami HD will feature a widescreen 16:9 aspect ratio and support motion controls with the PlayStation Move controller, and will launch as a PSN download.

The original action game, lauded for its unique Japanese handscroll art style, was developed by the now-defunct Clover studio, and saw a re-release on the Wii some years later. You take on the role of Amaterasu, the Japanese sun goddess, who inhabits the form of a wolf - your aim is to break the tyranny of the mythical monster Orochi by restoring colour to the world around you.

Sony has announced that Ōkami HD will support Trophies too - including a Platinum - for those seeking a renewed challenge. The game will be released in Europe and the US in the Autumn, with rumours of a Japanese release on 1st November.