Lollipop Chainsaw is out-scored by FIFA 12 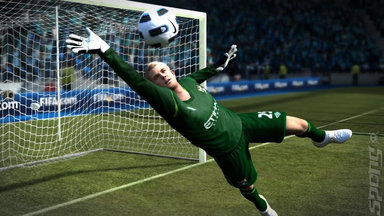 Ahhh, the UEFA European Championships (not racist at all) 2012 are in full and zesty cry, and this it seems has returned FIFA 12 to the top of the GFk Chart-Track video games Top 10. This means that 'sexy', 'ironic', 'non-exploitative at all' Lollipop Chainsaw doesn't hit the top spot.

This must prove - according to the kinds of 'proof' usually applied by right wing academics to 'violence in video games leads to eye-gouging granny rape' - that gamers prefer watching blokes kick balls than watching lasses hit blokes. For the small of understanding, that means it doesn't prove it.

"With Euro 2012 in full swing, EA?s ?FIFA 12? returns to No1 for a 9th No1 placing on the overall All Formats Chart, although the last time was way back in week 4 this year.

"In the 38 weeks that ?FIFA 12? has been around it has never dropped out of the Top 5, whereas ?FIFA 11? held on for just 23 weeks within the Top 5 over the equivalent 38 week period. Note that the UEFA Euro 2012 downloadable expansion pack was actually released way before the tournament started, back in week 17 this year.
Ubisoft?s ?Tom Clancy?s Ghost Recon: Future Soldier? drops to No2 having held on to 3 consecutive weeks at No1. Take 2?s ?Max Payne 3? drops 1 place to No3 whilst we welcome the first of 2 new releases in the Top 40 as Warner?s new IP ?Lollipop Chainsaw? debuts at No4 on 360 & PS3. Activision Blizzard?s ?Diablo III? continues to climb back up the Chart having been virtually out of stock 3 weeks ago, climbing from No22 to No6 this week.

"The other new release is Sony?s PS Vita ?Gravity Rush? debuting at No11, the 29th boxed product new release for Vita and the 9th from Sony."