PES Team Leader: FIFA Copied Us, Locked Us Out of Licences 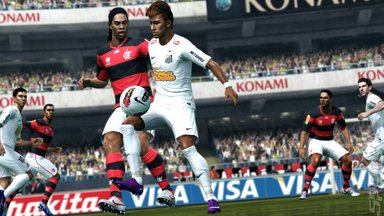 Pro Evolution Soccer Productions leader Jon Murphy has hit back at suggestions that the Konami football franchised has settled for second place, claiming that Electronic Arts has used its wealth to lock the Japanese company out of licences and that FIFA has copies PES innovations.

I attended a PES 2013 post-E3 press event yesterday, where Murphy made the comments.

"In terms of the sales of the product, clearly EA has been pulling right away from us. To be fair, if you look directly at the UK, we've never had a lead on them," Murphy said in an interview with Eurogamer. "We've always had a product quality lead on them, but we've never overtaken them in sales. There's always been a sales gap... it's also to do with the money spent on marketing and the money spent to lock us out of licenses."

When asked directly if he was saying that FIFA has copied PES, Murphy responded with, "Yes."

Most notable about this year's PES is the absence of Shingo 'Seabass' Takatsuka from the console team. Murphy explains. "Seabass himself had got to a point where he was perhaps getting a bit frustrated as to how he would take the franchise on. He was right there at the start of development of PES. He was the creator of PES so to speak. His vision of football games hadn't developed as fast as the machines that could run football games."

Mr Murphy also spoke to me regarding the differences and intense competition between PES and FIFA - you can read that, along with comment from Japanese producer Manorito Hosoda, later today.
Companies: Electronic Arts Konami
Games: PES 2013