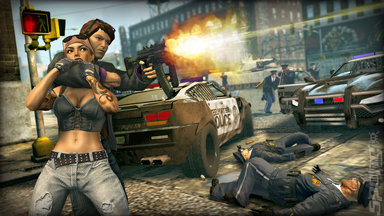 Former Naughty Dog founder and hard man of games, Jason Rubin, has been giving interviews about where the damaged company is going after his appointment as president, and the departure of the popular Danny Bilson. And he found himself being horribly misunderstood.

"Why couldn't that be a Red Dead Redemption or a Skyrim?" Well there are many reasons really. One of which is probably that the other two games are totally different and his question makes no sense. But he then told Crecente a very un-presidential thing:

"I look at that title and I say, ?Who cares what it is and why it got to be what it is? From that team we can make something that isn't embarrassing."

This was printed and resulted in what we can only imagine were some heated phone calls before Mr Crecente rushed the following out:

"To be clear, Rubin isn't saying that he's embarrassed of the game or that he's not a fan of Saints Row or proud of Volition." Oh, it did look like that. So, what was he actually saying? And was he misquoted?

"What he's saying is that he hopes that despite my feelings, that the team can impress me in the future. I followed up with Rubin after this interview ran and he reiterated that, adding that he both loved Saints Row the Third and that he thinks the team is capable of more. Those two things are not mutually exclusive."

Not sure here whether by "My feelings" we're talking about Rubin's or Crecente's. We await the next update...

In the meantime, Mr Rubin definitely meant it when he said, "We're going to concentrate on a small slate of titles and making sure we have the money to back them so the developers don't have to rush.

"I really don't care how we got here. This is where we are and I think the company is in a strong position."

That said, he probably does care...