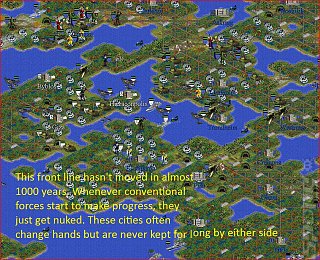 A Reddit user called Lycerius has been playing Civilization II for ten years. He "grew fascinated with this particular game (and)... by the time Civ III was released, I was already well into the distant future." What he saw was horrible.

According to the gamer - who does play other games and "has a life", the results of his fascination with the aged game were: "The world is a hellish nightmare of suffering and devastation."

There is more detail. For example:

"There are 3 remaining super nations in the year 3991 A.D, each competing for the scant resources left on the planet after dozens of nuclear wars have rendered vast swaths of the world uninhabitable wastelands.

"You've heard of the 100 year war? Try the 1700 year war. The three remaining nations have been locked in an eternal death struggle for almost 2000 years. Peace seems to be impossible. Every time a cease fire is signed, the Vikings will surprise attack me or the Americans the very next turn, often with nuclear weapons. Even when the U.N forces a peace treaty. So I can only assume that peace will come only when they're wiped out. It is this that perpetuates the war ad infinitum. Have any of you old Civ II players out there ever had this problem in the post-late game?

"The only governments left are two theocracies and myself, a communist state. I wanted to stay a democracy, but the Senate would always over-rule me when I wanted to declare war before the Vikings did. This would delay my attack and render my turn and often my plans useless. And of course the Vikings would then break the cease fire like clockwork the very next turn. Something I also miss in later civ games is a little internal politics. Anyway, I was forced to do away with democracy roughly a thousand years ago because it was endangering my empire. But of course the people hate me now and every few years since then, there are massive guerrilla (late game barbarians) uprisings in the heart of my empire that I have to deal with which saps resources from the war effort."

There is loads more good stuff like this, read it and look at some of the screens using the links below:

gingineer 12 Jun 2012 13:29
1/1
he should become fundametalist, it is the best way to wage war!
Posting of new comments is now locked for this page.