The man from the Indianapolis Colts had it all, lost it, gained it again... 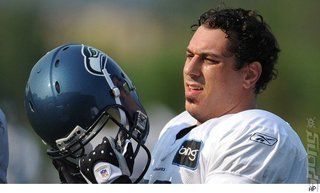 "I'd go to McDonald's for breakfast, order a bunch of food, come home and play for 18 hours into the next day, then crash, sleep for seven hours and do it all over again," so says recovering game 'addict' Quinn Pitcock who can now play for the Orlando Predators football team.

Aside form the McDonald's habit, he was talking about a video game. Can you guess which one?

If you said, "a random Call of Duty game that the Orlando Sentinel newspaper didn't go as far as to name" then you would be correct. See, Quinn, who used to play for the Indianapolis Colts, " continues to battle depression, attention deficit hyperactivity disorder and video-game addiction..."

How do we know he has video game addiction? "It's a huge set of challenges, born of, in my view, a brain that doesn't quite work the way everyone else's brain does," said Pitcock's friend, Kevin Roberts.

How does Kevin know? How does Kevin make his bucks? Why Kevin is "a counselor and author of "Cyber Junkie: Escape the Gaming and Internet Trap."

So of course it's an addiction to video games and has no deep seated cause, say for example in the nature of professional football and the infantilsaton and cosseting of its players. Thanks Kevin.