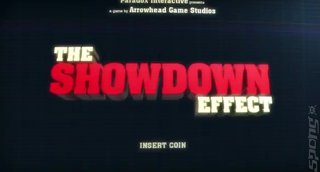 While Nintendo was doing its best to up its Social gaming and networking game, and Microsoft and Sony were vying for more gaming-applicable uses for their networks, Paradox has teamed up with Twitch.tv to enable gamers to broadcast game streams. Simple.

Says Paradox - the first company to partner with Twitch, "The Showdown Effect is their inaugural title featuring this functionality in the form of a direct link from the game?s dashboard to TwitchTV?s broadcasting platform." You can check out the video for The Showdown Effect below.

Emmett Shear, CEO of TwitchTV said that, Enabling players to stream their games to TwitchTV with a quick click - such as what Paradox Interactive is doing with The Showdown Effect - opens the door even wider to potential streamers in the gaming community.?

So, basically, you can start your own live streaming gaming TV channel. Excellent.